Widely recognized today as the world’s finest marine wildlife artist, Guy Harvey combines his unique artistic talents with his background as a marine biologist, diver, photographer and angler, to create marine wildlife art with an unmatched authenticity and visual appeal. Self-taught, Guy’s artistic roots can be traced back to his childhood on the Caribbean isle of Jamaica, where he spent many hours fishing and diving with his father along the island’s south coast. Guy’s obsession with the creatures of the sea inspired early drawings of the many different fish he observed. While attending a boarding school in England at an early age, Guy became entranced by Ernest Hemingway’s “The Old Man and the Sea” — and began developing a series of sketches that years later would prove instrumental in helping launch his career as an artist.

Though Guy was interested in pursuing his love of marine art, he opted for scientific training and worked hard in pursuit of an education — both in Scotland and back in Jamaica — and a career in marine biology. Along the way, Guy was able to supplement his income by selling his art, and a loyal following led to his first exhibition in 1985 — a one-man art show at a Kingston gallery of his 44 pen-and-ink drawings inspired by “The Old Man and the Sea.” The success of the exhibition encouraged Guy to spend more time painting, and by 1986 his work had spread to Florida through a series of showings at boat shows and fishing tournaments. By 1988, Guy Harvey had become identified as one of the world’s top saltwater gamefish artists, and was experiencing so much success that he gave up his career in marine biology to pursue his hobby full-time.

Though recognized most recently for his floor-to-ceiling murals at the Ft. Lauderdale Airport and at Nova Southeastern University in Florida — Guy is known best for his dynamic gamefish T-shirt designs. His original paintings have sold for tens of thousands of dollars, and today, reproductions of his art — often seen on magazine and catalog covers — are offered as limited edition prints, and can be found on a wide variety of clothing and gift items. Guy maintains his art studio in Grand Cayman, where he lives with wife Gillian and their two children, Jessica and Alex. 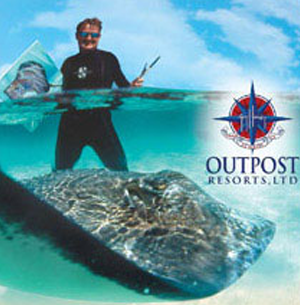 Guy Harvey’s goal is to create a collection of properties in unique destinations owned and staffed by people who are passionate about their time on, in and around the water. He wants to create a recreational product that exemplifies the type of experiences he enjoys in his travels, where each trip is an adventure – an expedition of discovery, with experiences that become memories to last a lifetime.

About Ocean Research and Cinematography 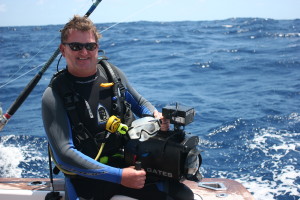 Guy Harvey is a unique blend of artist, scientist, diver, angler, conservationist and explorer, fiercely devoted to his family and his love of the sea. His childhood passion for the ocean and its living creatures not only inspired him to draw, but fueled a burning interest that prompted a formal education in marine science. Having graduated with honors in Marine Biology from Aberdeen University in Scotland in 1977, Guy returned home to Jamaica to resume his education, earning his Ph.D. from the University of the West Indies in 1984. Though he gave up a budding career as a marine biologist for that of a highly acclaimed artist, Guy has continued his relentless pursuit to unravel the mysteries of the sea, traveling the world to better understand the habits and habitats of the marine wildlife he paints.

Along the way, Guy became an ardent conservationist, supporting “catch-and- release” fishing ethics, collaborating with Nova Southeastern University in Dania Beach, FL, to form the Guy Harvey Research Institute, and working with many organizations to help manage and protect fishery resources around the world. Guy is an avid scuba diver and over the years has become a skilled underwater photographer and cinematographer, even pioneering the techniques used to photograph and film free swimming billfish. From Central and South America to Mexico’s Magdalena Bay, to such far-reaching locales as the Portuguese island of Madeira and Australia’s Great Barrier Reef, Guy’s personal observations from his diving expeditions have helped him capture, with his brush, the kind of detail his paintings are famous for.

In addition, Guy’s talent as a cinematographer has allowed him to share his observations through the production of educational documentaries — plus his hit television series “Guy Harvey’s Portraits From The Deep.